How much does a drive belt tensioner replacement cost?

Your engine accessories like the air-conditioning compressor, alternator, and power steering pump depend on the drive belt to keep them in operation, and the drive belt tensioner keeps the belt tightly wound against each part’s pulley.

Inevitably, the drive belt tensioner will develop wear over time, either losing its tension on the belt or a bearing failure on the pulley.

The drive belt tensioner is not a maintenance component and, as such, has no set interval or expectation for replacement.

A failing drive belt tensioner is typically found on higher-mileage cars, though.

To replace the drive belt tensioner on most models, you can expect the parts and labour charges to tally up between $200-$400 for most cars.

What is a drive belt tensioner?

Your engine’s drive belt, or serpentine belt, requires tension to keep it firmly pressed against the crankshaft pulley and other pulleys to drive the engine accessories.

The tensioner may be either rigid with a tension adjustment bolt or a spring-style auto tensioner.

The drive belt tensioner’s pulley presses against the drive belt, keeping it taut and on course while it runs around all the pulleys in the engine bay.

The tensioner is made of metal, often a cast aluminum or steel bracket and a small, round pulley mounted on a bearing.

It revolves at high speed so it’s critical that the bearing rolls smoothly and without side-to-side play.

If the spring tension or adjustment bolt fail, or if the pulley’s bearing is worn out or loose, you’ll need drive belt tensioner replacement. 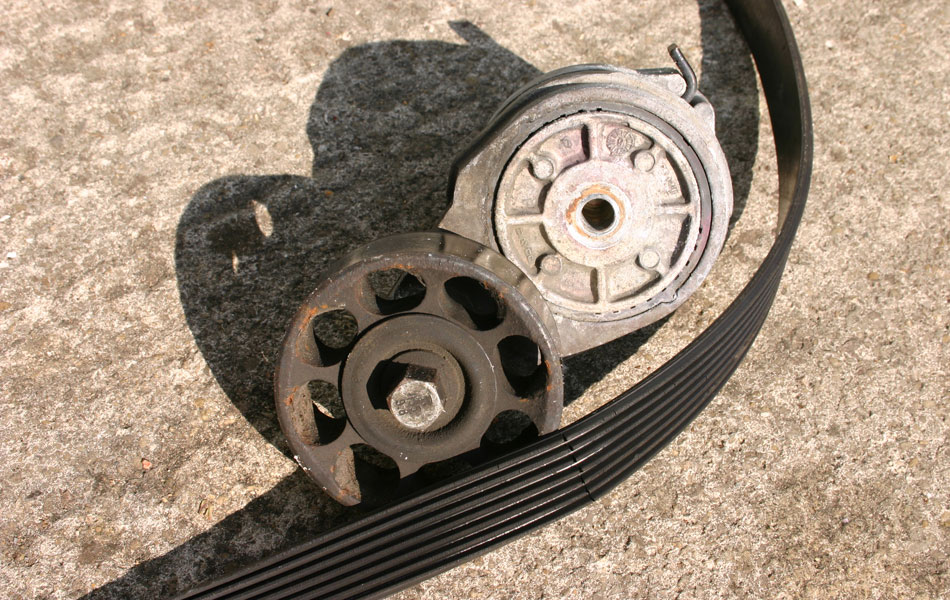 How is the drive belt tensioner replaced?

How important is replacing your drive belt tensioner?

A weak or failing drive belt tensioner can throw the serpentine belt off unexpectedly, resulting in a loss of power steering, charging system operation, and potentially other issues.

That can pose safety concerns if you’re driving. Replace the drive belt tensioner as soon as it’s been diagnosed as faulty to keep you and your passengers safe wherever you drive.

We let you search and book from over 1,700 qualified mechanics, who eat car troubles for breakfast.