How much does a fuel injector replacement cost?

They are responsible for precisely delivering the right amount of fuel into your engine so it burns evenly and efficiently.

With wear and tear, deposits from low-grade fuels, and over time, one or more fuel injectors can become plugged or leak fuel into the engine.

It’s typically cars with more than 100,000km that require fuel injector replacement, but an unexpected problem could require replacement sooner.

On average, replacing one fuel injector will be approximately $300 to $500, depending on the make and model you drive.

Since your fuel injectors pulse constantly while the engine is running, all of them may require replacement around the same time.

What is a fuel injector?

Fuel injectors are the final piece of your fuel system where fuel exits the system and enters the engine.

It’s a compact, electronically-controlled valve attached to the fuel rail and it’s consistently under pressure.

Your engine has one fuel injector per cylinder, and the fuel injection process is controlled precisely to allow for maximum efficiency and power at all times.

Fuel injectors are made of a metal body machined to precise specifications and topped with a plastic cap and electrical connector.

A tiny electrical solenoid operates a pintle valve at the bottom of the injector.

The fuel rail attaches to the top of each injector and an electrical connector sends the fuel injector a signal to open and close the pintle valve.

Debris and fuel contaminants can plug up the pintle causing it to spray fuel inconsistently, not at all, or leak too much fuel into the engine.

Once a fuel injector exhibits symptoms of failure, it must be replaced. 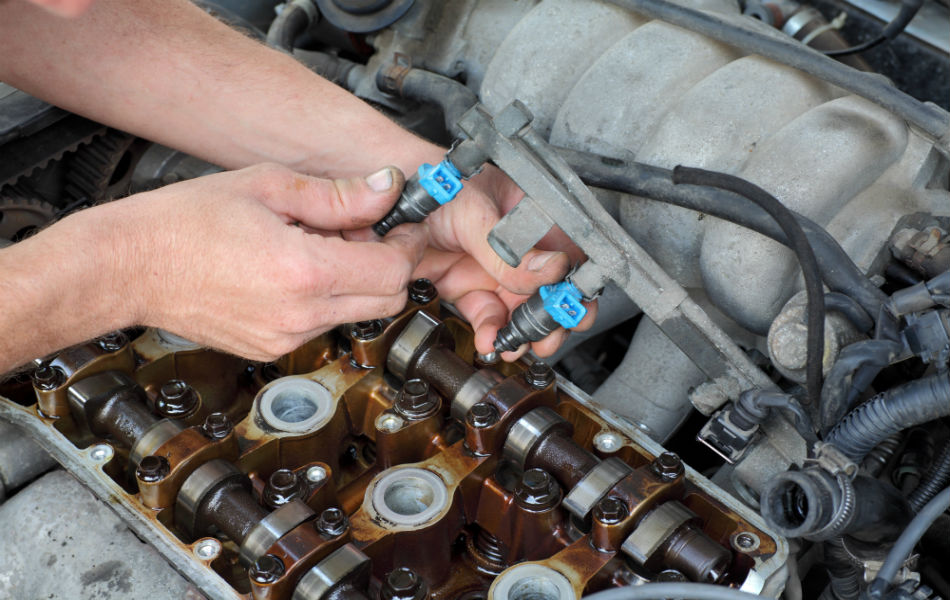 How are fuel injectors replaced?

How important is replacing your fuel Injectors?

A leaking or plugged fuel injector causes the related cylinder to run rich or lean, both of which can cause long-term problems that require extensive repairs.

In addition, your car’s performance will suffer and your Check Engine light will remain on until the repair is performed.

While there’s no immediate safety concern when fuel injector replacement is required, it can save you much higher repair costs down the road if it’s performed sooner rather than later.