What does it mean if my A/C smells?

Before you panic, a weird smell from a vehicle air conditioning system doesn’t necessarily mean you need to be in danger mode, or that an expensive repair is imminent.

It could be a damaged unit or may be down to bacteria growing in the air vents, which can happen as vehicles get older.

Although the smell might be unpleasant, there’s no reason real danger for most of us - although it’s worth noting that some people who may be sensitive to mould and mildew may have issues.

Remember too, that if you smell gas or something burning you will want to switch the air con off and get a technician to do an inspection as soon as possible.

Depending on the reason, pricing to have a smelly A/C inspected can range from $20 through to $360.

This inspection is reliant on a system of checks and eliminations, which ultimately will identify where that reek is coming from.

How does the A/C system work?

Before we get into why your A/C may smell, let’s have a look at how a vehicle air conditioning system works.

They are a complex system, so we will keep it to key points, but it generally works in the same way it does at home or in the office.

Through compression and expansion, the refrigerant within the system is icy cold by the time it reaches the evaporator where it absorbs the heat from the surrounding air – making it cold – before it is blown into the vehicle cabin.

The refrigerant travels through the components which perform individual tasks:

The A/C system runs in a continual cycle while switched on. Over time, the refrigerant will need topping up. The amount required is based on achieving the correct pressure for optimal range of temperature.

Common reasons for the A/C system to smell 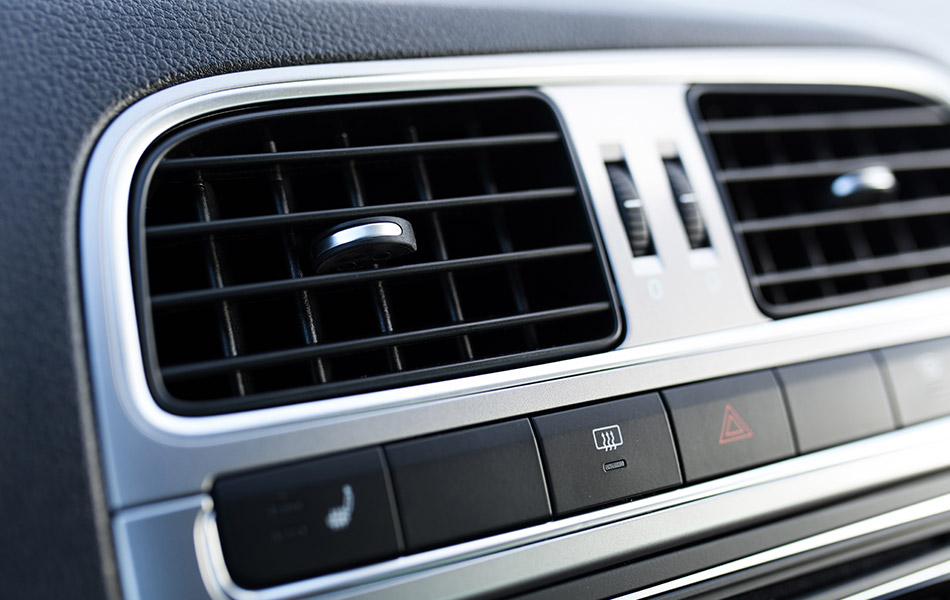 How is the A/C system smells inspection performed?

If the smell is obvious, a technician probably won’t require a highly trained sniffer dog to pinpoint the problem.

A system of elimination should suffice.

The technician will systematically check and eliminate each component until they identify what they suspect is causing the smell, then advise what needs to be done and offer a cost to eliminate it.

How important is the A/C system smells inspection?

That depends on how tolerant you and your passengers are to foul smells.

As we mentioned earlier, some individuals are sensitive to mould and mildew and, if in close proximity, it could cause some health problems.

It’s best to inspect, identify and eliminate that odour as soon as you can.

Unless you have a convertible and live in the Atacama Desert, there will come a day when you will need to wind those windows up and turn on that pongy air con